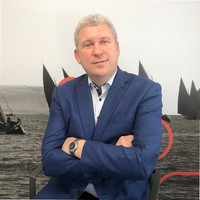 In a week in which 500 career guidance counsellors are coming to the city, one of the west’s most successful tech entrepreneurs is calling on young people and those who influence them to realise that they can build a fulfilling career in a global industry right here in the west of Ireland.

This article stems from a tweet last Sunday night when Joe Smyth, senior vice-president of R&D at Genesys, based here in Galway, expressed his concern over the falling number of CAO points needed to get into software engineering and computer science at third level colleges around the country.

Mr Smyth said the west of Ireland tech sector is thriving like never before, and with a whole host of tech companies setting up in the city, excellent opportunities for a varied and rewarding career in software and computing exist in the region. And the pay is good too with software graduates starting on salaries between €35k and €40k.

Ten hours after our Twitter conversation, I sat across from Joe Smyth at Genesys’ beautiful offices at Woodquay in the heart of the city and spoke to him about his campaign. Mr Smyth is a key member of IT Atlantec Galway (ITAG) and it has an initiative where members get out to talk to career guidance counsellors about careers in tech, but now they are going to line up a group of talented people across an array of different tech businesses to go and talk to career guidance counsellors to help them frame what a career in computer science can be like.

I think people are scared of computerscience because it sounds very esotericor nerdy. That is not true at all. If you have any aptitude for maths or applied maths or physics, you don’t have to have ever programmed a computer before going into college and they willteach you everything you need to know.

It was when he was in Cupertino in the Apple HQ of the early 1990s, he realised that Irish software developers are uniquely placed to have careers of global scope. “We have the language, we have the stories, we have the personality. I think there are a lot of people missing out on an amazing career by not considering computer science or electronic and computing. I have built my career in Galway since 1995 and I got to see the world. It is a very transferable skill.

“If you have a degree in computer science it is a globally recognised skill. We have had people who get wanderlust in their mid-twenties and they can go off and work in Canada or Australia with those skills and be well paid for it and be able to come back.”

So why are careers in software and computer science not being pursued with the vigour they ought to be? “I think people are scared of computer science because it sounds very esoteric or nerdy.

That is not true at all. If you have any aptitude for maths or applied maths or physics, you don’t have to have ever programmed a computer before going into college and they will teach you everything you need to know over the course of a four-year-degree.

“The anecdotal evidence I hear is that computer programming is not being positioned well as a career choice. The thoughts are that you have to be this narrow focused nerdy archetype to be successful which isn’t the case at all.”

So have people the wrong impression of a life in tech? “People think they are going to be typing lines and lines of code all day which is just not the case.

What we actually spend our day doing is programming for maybe two or three hours, while the rest of the time is working in a co-operative way with team members on architecture and implementation, breaking down the problem and working with the user experience team to figure out how customers will interact with the software. It’s extremely creative and rewarding and after all software is eating the world, so you can apply these skills in any business space nowadays.”

Showing off the west he revealed what drove him and co-founder, Barry O’Sullivan, to set up Altocloud. “For us, part of our thing was we wanted to do a start up but more particularly, we wanted to show that it could be done successfully in the west of Ireland. Both of us are heavily invested in the success of the west of Ireland. We have world class people here. There is nothing stopping Irish people being successful anywhere because we have the social skills and we have the educational background, and it is the combination of those two things that allow you to be successful.

“I came back from the USA to Nortel where I worked on VoIP and customer care software. Then I joined Cisco and worked on unified communications; and then we stepped out and did Altocloud, learning cloud computing and AI, and here we are with Genesys scaling it all up.” Altocloud moved into a room in the start-up incubator in the Tech Transfer Office in NUI Galway, and hired so many amazing software engineers and data scientists who were just finishing up their master’s and PhDs from the Insight SFI Research Centre, also on the NUI Galway campus.

Galway is a much more varied ecosystem nowadays. There is a much broader set of companies from startupsthrough to multinationals. There is a lot of really excellent technical work going on in the city and the career opportunities are there for smart kids who want to work in software.

Four years later, Genesys called Altocloud and asked to see a demo. By this time the team had grown to 22 staff in Galway, primarily in software development, had a solid set of customers, had moved in April 2016 from the NUI Galway Tech Transfer Office into the Portershed as its first tenant. Genesys acquired Altocloud in February 2018 and the future is exciting, with further growth in the AI centre of excellence planned in the city.

“Here with Genesys, we have 110 people after 18 months. The number one thing is finding smart, creative, people with skills in software, user experience, and product management. We can build their capabilities in cloud computing and AI from there.”

Broader ecosystem “Galway is a much more varied ecosystem nowadays. There is a much broader set of companies from startups through to multinationals.
There is a lot of really excellent technical work going on in the city and the career opportunities are there for smart kids who want to work in software.

In addition to Genesys, the city now boasts a range of multinationals investing in tech including Fidelity Investments, MetLife, and a swathe of newcomers led by SmartBear, MathWorks, Rent the Runway, and Soti.

The Galway Technology Centre and the Portershed, working with NUI Galway, Insight and GMIT, plus IT Atlantec Galway, have driven a flourishing start-up scene with notable mentions such as Siren, Joulica and PiP IT, plus a host more.

Mr Smyth made his call to students in the week when more than 500 guidance counsellors from all over Ireland are expected to attend the Institute of Guidance Counsellors National Conference which will be held in NUI Galway, tomorrow (Friday) and Saturday. This 2020 conference is being hosted by the Galway/Mayo branch of the Institute of Guidance Counsellors.

For more information on careers in software and computing, visit the ITAG stands at the 2020 Pathways educational event at the Galmont Hotel on Monday March 30.

The Digital Women’s Leadership Program is a 10 day programme (8 half...
More info
View All Upcoming Events